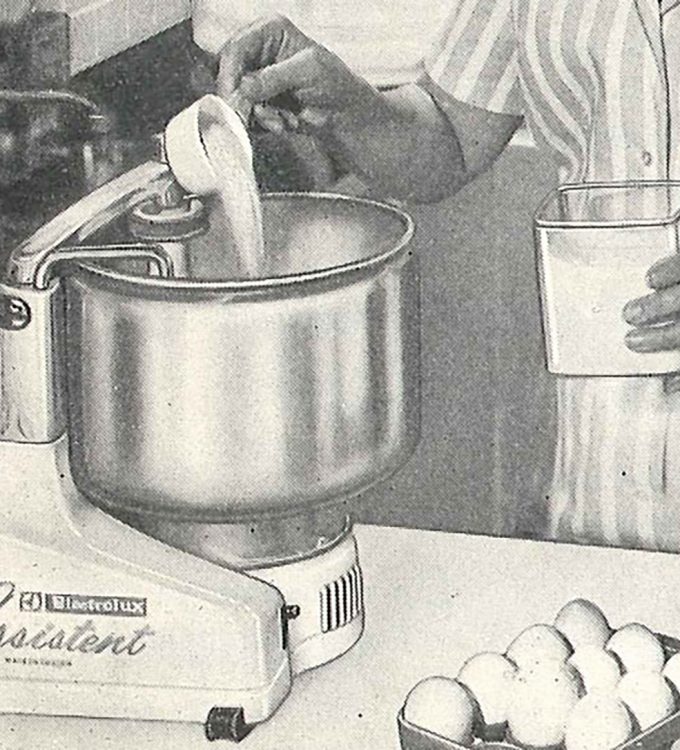 En Assistent i köket. “The design is extremely well-thought-out; in fact it’s tempting to says it’s ingenious. I would count it as a good deed if I could persuade some men out here in the country to buy it and…

The Assistent kitchen machine can trace its origins back to 1937, when Electrolux purchased the rights to the appliance and its name from a company in Eskilstuna. Assistent was at that time a kitchen machine for professional use and was considered to be too big for ordinary households. Engineer Alvar Lenning was therefore commissioned to redesign the kitchen machine and create a model that was suitable for both the ordinary household and for the farmhouse kitchen. Lenning incorporated the various parts in a streamlined alloy casing that gave the appliance a thoroughly consistent look and was easy to keep clean. The motor stand was painted a beige/cream colour, the bowl was made of stainless steel and the blade and roller were made of wood. In 1940, during the Second World War, Electrolux launched its new kitchen machine Assistent, which had a very positive reception. It was also an appliance suited to Swedish conditions and Swedish cooking habits.

“The design is extremely well-thought-out; in fact, it’s tempting to says it’s ingenious. I would count it as a good deed if I could persuade some men out here in the country to buy it and thus make the lives of housewives a little easier.”

During the Second World War both food and materials were rationed, and this had an effect on the Assistent. For food rationing a special emergency cookbook was enclosed to help use all ingredients in the best possible way – nothing went to waste. The shortage of materials after the Second World War meant that between 1945 and 1949, the kitchen machine had a delivery time of three years. Naturally, this was devastating for sales, but if you had any form of hand disability or weakness and could get a doctor to certify that an Assistent would make the situation easier, you could jump the queue. This meant that during these years, Electrolux received a considerable number of doctors’ notes from customers who wanted their kitchen machine as soon as possible.

New accessories were launched all the time, and to keep them neat and tidy, you could get a special accessories cabinet in matching beige/cream to store them neatly. If you didn’t have room in your kitchen for an accessories cabinet, you could instead fit out a kitchen drawer with suitable compartments. Free drawings could be ordered from Electrolux. This was so that the accessories could all be stored together in one location in the kitchen, preferably close enough to the appliance for them to be easily accessible without you having to hunt around for them.

In the 50s the technical innovation of the centrifugal switch was introduced. This constituted the kitchen machine’s overload protection, so if the dough was too heavy, or the meat that was to be minced was too tough, and the speed dropped, the motor would stop. During the 1950s further labour-saving accessories were also introduced, under the slogan Enklare, godare, lättare, snabbare med Assistent specialtillbehör (Simpler, better, lighter, faster with Assistent special accessories). In the 50s, blades and rollers made of plastic instead of wood were also introduced. This was a great improvement, and meant that users no longer had to put up with the wood swelling or cracking.

“Why did I give her something like this for Christmas? Well,” says Mr Martinsson, “Housework takes up so much time, and I think that a housewife should have as many things as possible to make it easier. The Assistent makes cooking a lot easier, and also – and I think this is just as important – it brings a bit of play into the kitchen. In other words, it makes the work more fun.”

In 1969 production moved to Västervik and the same year saw the introduction of the Assistent Variomat, which was the biggest change since the appliance was launched in 1940. The streamlined design was replaced by more of a square design inspired by the US car industry of the day. In addition to the new design, the Assistent Variomat had a timer and variable speed control. The Assistent was the only kitchen machine on the market with these features and was once again a massive success.

The Assistent kitchen machine became more and more popular, and in 1974 the 250,000th machine was delivered. During the 1970s there was a fashion for bolder colours in the kitchen, and in 1976 the first Assistent in new colours was introduced – in the fashionable combination of orange and brown.

In 1995 the motor stand was once again given a completely new design. The streamline shape had a renaissance; consumers were tired of the square design that had been the standard since the 1960s. For the Assistent, the new soft design represented something of a return to the sweeping streamlined shape the appliance had had originally. This was the third design for the kitchen machine since its introduction in 1940.

In 2001 the factory in Ankarsrum was sold to AB Traction, and the company was renamed Ankarsrum Industries. Ankarsrum Assistent AB is one of three companies in the group. The focus of Ankarsrum Motors AB is in production of AC and DC motors, and Ankarsrum Die Casting AB casts and processes aluminium components.

The best investment for a Merry (and tasty) Christmas

Recipes for Halloween from Ankarsrum

Here you will find all the recipes you need for a happy (and scary) Halloween.