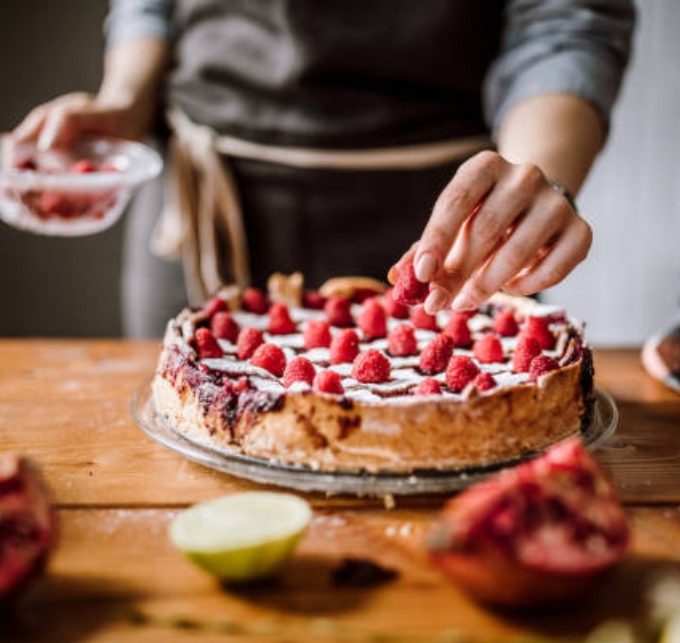 Baking gluten-free means excluding from your baking cereals, such as wheat, rye and barley, that contain gluten.

Baking gluten-free means excluding from your baking cereals, such as wheat, rye and barley, that contain gluten. Gluten is a protein with properties that, among other things, stabilise the bread, make the dough elastic, and help the dough to rise and the bread to be airy and moist. When making gluten-free bread, you therefore need to find a substitute for gluten, otherwise the bread will be dry, flat and crumbly. Psyllium husk is one such ingredient that you can use in gluten-free doughs. Psyllium husk binds a lot of liquid and so makes the dough stick together and become more elastic, enabling it to be shaped and helping to make the bread moist and airy. Xanthan gum and Pofiber (potato fibre) are other examples of so-called stabilisers that can be used as substitutes for gluten.

If you want your bread to be airy, it is also important to combine and work the dough properly. A gluten-free dough should generally be looser than a normal dough, otherwise the bread will be dry. This makes the dough tricky to knead by hand because it is too sticky, which is why an Ankarsrum Assistent is indispensable when baking gluten-free. When making gluten-free bread using an Ankarsrum Assistent, it is best to dissolve the yeast in the dough liquid first, directly in the bowl, and then to whisk in the psyllium husk if using it in the recipe.

The easiest way to do this is by hand. The liquid should then be left to stand and will swell to form a gel in about 10 minutes. You can now add the rest of the ingredients, such as gluten-free flour, salt, oil and the other ingredients listed in the recipe. It is possible to add these ingredients all at once, but it is a good idea not to add all the flour in one go, but to keep back about a quarter of it.

Let the Assistent work the dough for a few minutes and then add the rest of the flour gradually to make sure the dough is worked properly. Ankarsrum’s dough roller and dough knife are particularly good at working gluten-free dough because they are suited to loose doughs and produce the best results – a well-combined dough. A gluten-free dough does not need to be kneaded as much as a normal dough, because there is no gluten in it to form a network of strands, which happens during kneading. However, gluten-free dough does need to be well mixed and the dough roller does this better than a dough hook.

When dough made in the Assistent is ready, it will still be loose and sticky. Don’t be tempted to add more flour as this will make the bread dry and dense. The dough will be less sticky once it has proved. Try to avoid kneading in more flour after proving as well; instead, apply a dusting of flour to the surface when you are ready to shape the dough. One tip is to moisten your hands with water or oil when shaping the dough for baking, which stops it sticking to your hands and avoids adding more flour.

Different types of flour have different tastes and baking qualities, which means it is rarely possible to replace wheat flour in a recipe with a gluten-free alternative. To get the best flavour and texture out of gluten-free bread, it can help to use several different types of flour in one and the same recipe. Sorghum flour and rice flour are examples of flours with relatively neutral flavours and they can be used in larger amounts in a dough. Buckwheat flour, chickpea flour and soya flour have a slightly stronger flavour and are best used together with a more neutral flour. Oatmeal, sorghum and teff flour are nutrient-rich flours, while cornflour and potato flour contain a lot of starch with a high percentage of carbohydrates and work a bit like a thickening agent. Browse the flour shelves and you’ll discover a whole new world of exciting flour choices. Try anything you like, dare to experiment in the kitchen, and don’t be afraid to fail. The more you bake, the more you learn and the more fun it will be!

Use a weighing scales. Gluten-free flour packs down easily and so weighing the ingredients gives a more accurate result than measuring them out.

Work the dough properly in an Assistent to get the best results.

Moisten your hands with water or oil when you shape the bread to stop the dough sticking.

Allow the dough to be sticky; if you add too much flour, the bread will be dry.

Preferably bake loaves in a tin and buns in a muffin tray. This way the bread keeps its shape and doesn’t spread across the tray.

Leave the bread to cool properly before cutting it. Gluten-free bread is often doughy inside straight from the oven and needs a few hours to stand.

Remember that gluten-free baking is no more difficult than baking with gluten; it’s just about learning to think a little differently!

With a kitchen machine from Ankarsrum you get a complete helper and assistent in the...

The blender is made to vigorously fix everything from chopping chocolate to mixing hummus and...

Make your own pasta with Ankarsrum

Homemade pasta, an act of love that your friends and family will thoroughly appreciate. Learn...